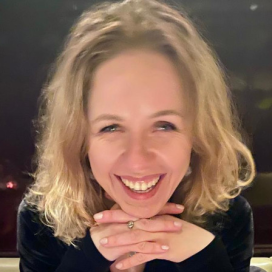 If you are feeling like taking a leap of faith when you don’t have a clear direction,, wanting to experience life changing moments, come and talk to me! It is absolutely Irina’s speciality!

Someone told me that I was an ancient spirit, hundreds of years old, who chose in this life to divide into two complementary souls, me and my twin sister, Silvia.
I am a woman who smiles a lot, stubborn and determined to follow my own path.
I was born into a happy, harmonious family that offered me memories and feelings that make me the woman I am today.
Our parents raised us in the spirit that you can. You will succeed, you don't have to go to a special school, which was reflected a lot in our lives and decisions later.
The reason that caused the start of my loss of vision aggressively was my father's loss. I quickly accepted the situation, now you see, tomorrow you won't see, that's it, I adapted, but it was also a denial combined with shame, it was hard for me to admit.
Then it was followed by the episode - bungee jumping - important for accepting the visual impairment I had already acquired. Thanks to a person, my cousin, I had the clarity not to be ashamed and hide from who and what I am. This was my moment of revelation, acceptance, and rebirth. Yes, it is a challenge, but I am not my disability. It is much more than that.

It's been a whole process so far.
After I finished my studies, I was struck by what it means to have a disability in Romania. Although my intellectual abilities would have helped me get a job, I was labeled and not given a chance to work in politics. Although I was involved in many activities within a political party during college, I campaigned, I was involved in the youth association, I did press monitoring, I did many things, and I learned even more, but it was a stage in life. It was a stage that helped me and had a quick and disappointing ending. And now I know it wouldn't have been for me.
Together with Silvia, we later opened a business that had nothing to do with our field of expertise. Although it was not a profitable investment, in the end, it was a good investment for us because it offered us a profession.
After we became therapists, we developed a business: tandem massage in 4 hands, based on verbal and body therapy, a beautiful experience that lasted 7 years.
Later, in 2012, I decided to try my luck in the Netherlands. I opened a practice there. I made an office in a friend's house, which helped me a lot. Then I grew my own business, made friends, and organized events. It was 6 full months, hard and … beautiful. I would not have wanted to come back. At that moment, I only felt disappointment and failure. But like anything in life, everything happens at the right time.
In the meantime, in the Netherlands, I certified myself as an international Doctor DOT therapist, a kind of VIP massage, very ok. It was an experience again, after which I somehow felt that I wanted to make a change in my life. It was an important stage, necessary for me to satisfy my professional needs and financial independence. All the travels and everything I undertook was in my power, with my decisions, good and bad, mine.
As I said, the idea of ​​change had begun to take root in my mind, but I did not have any directions. At that crossroads, I met Charlie, my fiancé, at the Caledonian Ball, a fundraising event organized by the same foundation that gave me Clifford, my much-loved guide dog.
After I met the founders of this foundation, Silvia and I, we started to give our community motivational speeches and share with the world who we really are, we, people with various disabilities.
That Caledonian ball marked the first appearance, mine and Silvia's, and as keynote speakers, in front of a big audience, it was by far my biggest challenge at the time. It was a special moment, our moment, the world was really there, I felt that way. Plus, it brought me a love story. Charlie is also my mentor. He gave me clarity and encouragement: don't complain that you want to change something, change.
I still wanted to experience new things, and now I had a voice that challenged me to take action. So I got on the phone and had the inspiration to call the right person at the right time. That's how I became a broker in private international health insurance. I started from scratch, the learning process was adapted to my needs, I knew the professional satisfaction from the first year, and I am pleased that we gave each other a chance to succeed.
I really like what I do. I like talking to people. In fact, this is the key, and I really like talking to people. It's mentoring with every discussion I have. I like this, and it comes naturally; that's how I realized that my vocation is not just that of a salesman. My vocation is, among other things, to become a Life Coach. So I started a Pob Proctor Thinking into Results course and headed to an organization to take accredited life coaching courses.

It is essential to me!
If I didn't combine the two, I wouldn't perform professionally.
For me, this balanced thing is not about delimiting the two. It doesn't work from 09:00 to 17:00, and I have a professional focus, then I know that I escaped and all the focus goes personally. I always worked like a spiral, and now I have something to solve for my family, something for the job, then something personal, I go back to work. That's my rhythm.
I take my strength from the balance I have in my personal life, and I will not neglect my family no matter how important the job is; for me, the moments of 'together' are important. These are quality moments, the ones that will really matter later. Of course, the job is also significant, especially when you do it with pleasure. I organize my time to do both, sometimes better, sometimes less well, on one side or the other, because nothing is perfect.

Mentor for me, based on the experience I have had so far, means to be an excellent listener, hear further what the man in front of you is telling you so that later you can ask the right questions and give clarity, direction, and layout.
I also think that mentoring is something that comes from within you. If you are there really present for the person in front, things happen through you.
And it is important to be there to support the person in front of you, for that person to obtain the answer oneself, in this way she/he proves that she/he can, that everything is inside, but if someone comes and takes this power from you, this will not elevate you.

I would urge them to be as natural as possible, natural, authentic in everything they do.
Genuine is a gold mine for everyone, everyone is looking for this, and we will never feel uncomfortable in our own skin. We will always be at peace to show the world the way we are.